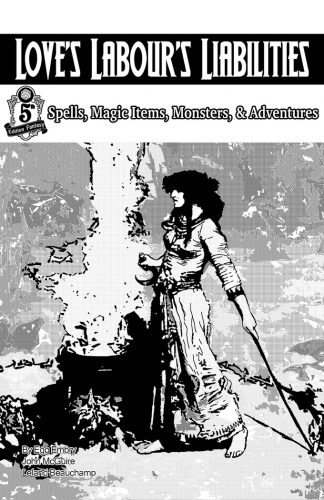 We live, we love, and sometimes we lose. All are part of life, and yet the last part is the thing that will not only knock us to the ground but put so much weight on our chest that we may never find a way to get back up again.

So I am a part of a new Kickstarter…

And for the first time, it is a sequel to something I’ve already contributed to:

We launched on Monday around 11 AM and by the time I’d gotten back from a doctor’s appointment at 2:30 PM, we had funded! It was a modest goal this time of $400, but there is definitely a huge sigh of relief when you hit your goal. It makes it so that you can actually enjoy the ride a little bit more. We’ve now begun to focus on Stretch Goals which will be a bonus X-Card for use at your table.

This year marks the 3rd annual (I’m assuming) Kickstarter Zine Quest for the month of February. What’s Zinequest you might ask? Well, if you cast your mind back to the 60s or 70s or 80s when you would go into a record shop or comic shop or gaming store and had those pamphlet looking things sitting there that were put together by hand… that’s basically what a Zine is. Yes, today we have programs that allow it to be done a bit easier, but the goal is the same. These are ideas that have been percolating since our successful Kickstarter of Love’s Labour’s Liberated during Zine Quest 1, and that Do-it-Yourself attitude has gotten to us again.

But we learned from the last Kickstarter. This time the whole thing is completely done and ready to go. So the only thing you will have to wait on is the actual printings, but the day after the campaign ends, you’ll have your pdf!

It seems like when I’m thinking of ideas for the backstories for any characters I play, I drift toward those who might have a little bit of darkness in them. Perhaps there was an unrequited love, perhaps there was something more devious at hand. That’s what we’ve tried to provide for players in this Zine. A Broken Hearted Monk. An elemental force of nature obsessed with it’s Warlock. New spells, magic items, and much more. All options for bringing even more depth to your 5th Edition games.

Like I said on the first Zine Quest we did, you never know who is going to potentially read your work. My hope is that everyone who gets it and reads it is able to use at least one thing from it in their home games.

I hope you take the opportunity to check out the Kickstarter!

Playing in the subterranean underworld in 5e or Pathfinder? Need some more races (monsters), societies, and classes? AAW Games has the Kickstarter for you! 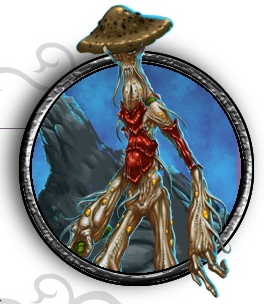 In 2014 AAW Games released the ENnie Award nominated Rise of the Drow mega-adventure along with various source books, injecting a huge dose of the wonder of spelunking back into the deep realms of the games we all know and love.

Critical acclaim and fan demand prompted the creation of individual books, featuring new races and classes born from the darkness and alien splendor of the caves below as well as detailed notes on the cultures and histories of these proud people.

The frontier of the deep, its black horizons with their phosphorescent lights, deserves unique heroes and villains to populate the crystal-studded caverns, black subterranean lakes and mushroom jungles.

Using feedback obtained from numerous fans, play-testers, and reviewers we have completely revised and expanded upon all of our races & classes and combined them into one rock-solid volume for each system, suitable as darker, weirder and more insidious companions to your Pathfinder RPG and 5th Edition core books.” 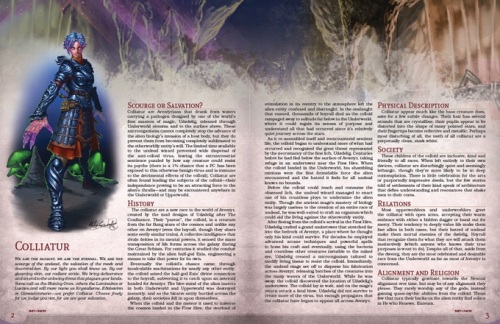 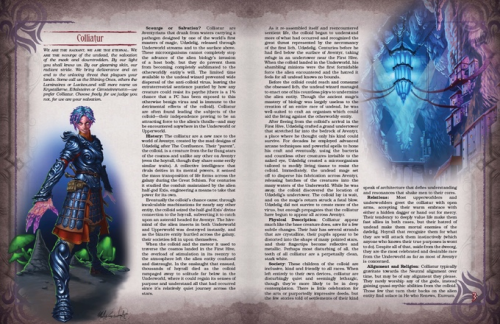 Looking at these layouts, AAW is clearly thinking about how the source systems should be presented and not doing a simple copy and paste with only the stats tweaked. 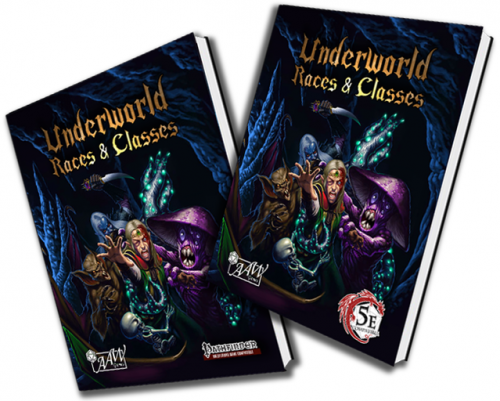 While this Kickstarter does not feature any vanity press options (my usual barometer for pledging for RPG Kickstarters), I’m featuring it because:

This is basically the Underworld Player’s Handbook and any campaign set underground will benefit from this resource.