3 RPG Kickstarters You Should Back – Creature Codex 5e, Dice Tower of Power, and Sherwood: The Legend of Robin Hood

Let’s start out 2018 right by finishing up a few 2017 RPG Kickstarter campaigns! One setting, one monster manual, and a reasonably priced dice tower, and all of them are worth checking out!

“Welcome to Sherwood Forest, home of heroes and outlaws

Welcome to Sherwood Forest, a place of mystery and excitement. Band together to oppose the forces of the Sheriff and Prince John in England during the Third Crusade. Create your characters to do what is best for England and King Richard by protecting his interests at home.

This setting book allows you to play in the Medieval England of the period of the Third Crusades. The book is designed to not only emulate the historical period, but also the mythical one as well. Play in any level you would like from historical to mythical, emulating various novels, stories and tv shows about Robin Hood.

This setting can be played in either historic or mythical mode. Historic is more realistic, leaving out magic, but in mythical mode, magic has been added to the setting allowing you to play in the fantastic.

This book is the second edition and is written by Jonathan M. Thompson and Wil Upchurch and will be available for the Savage Worlds Role Playing Game. The manuscript is complete, and an alpha draft will be made available to all confirmed backers at least one month after the Kickstarter has been funded.”

I did an interview with my friend, Jonathan M. Thompson, about Sherwood: The Legend of Robin Hood 2e (Savage Worlds) here that gives more details. It’s worth checking out.

Is this game going to be a winner? Like Jonathan says in our interview, he’s “done versions of this book for Pathfinder, D&D5e, and Swords & Wizardry.” I think this is going to be a solid offering.

“Why pay $30-$200 per dice tower when you can get THREE Dice Towers for $25? A simple cardboard dice tower solution for a simple problem

Like you, we play a lot of board games. Anyone who plays board games knows that rolling dice is a pain in the ass. You lose them under furniture. You ruin your board games by knocking over all your pieces.

A common solution is to get a dice tower but dice towers aren’t cheap. They can range from $30 to $200. But… if all its meant to do is roll dice why is it so expensive?

That’s why we created the Dice Tower of Power. It’s a simple solution to a very simple problem.

Why the Dice Tower of Power?

One other benefit of the Dice Tower of Power is that we sell them in packages of 3. Most games are played with 4-6 people. So with 3 dice towers you don’t have to pass the dice towers around. Just pass the dice. This saves time and is a lot more convenient. Lastly, the price. We’re selling 3 dice towers for $25. So for less than the price of one dice tower available today you get 3.”

I really want a dice tower, but every time I look at other dice towers the prices make blood run out of my nose. The idea of THREE dice towers for $25 is the deal I’ve been waiting for! They come in three-packs so it’s a purchase and a gift! Buy a pack and keep one for yourself, give one to your GM and give one to the player that always shoots a die into your drink cause his aim is… owe!

“Demons, dragons, kobolds, & undead galore, from the creators of the Tome of Beasts–plus commissions and monsters designed by backers! 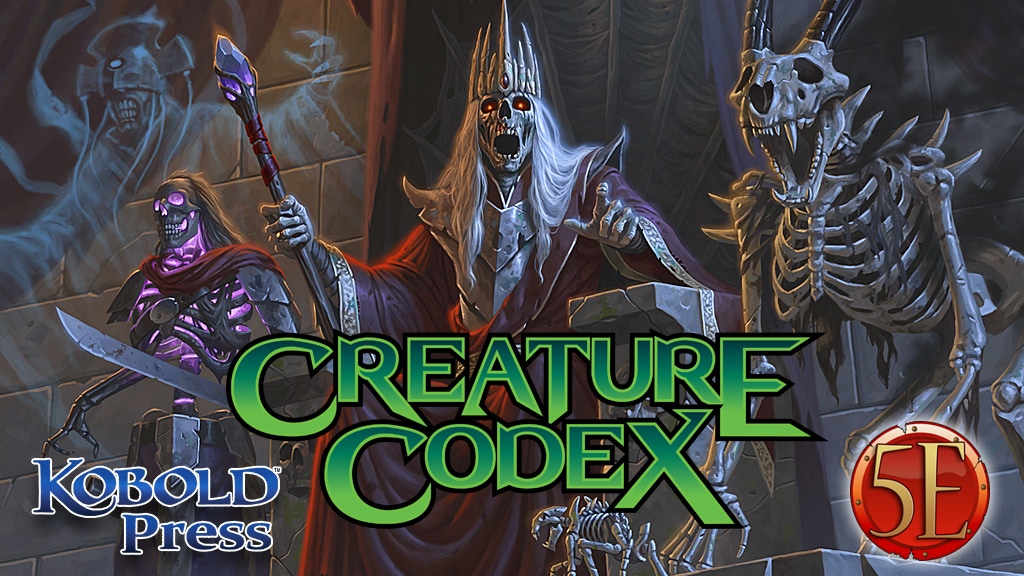 From the creators of the titanic Tome of Beasts! Kobold Press is at it again, with a lethal and highly entertaining horde of 5e-compatible monsters to challenge new players and veterans alike.

The Creature Codex will bring over 300 new monsters to 5th edition, including lotus golems, wasteland dragons, shadow goblins, and so much more. All Creature Codex Kickstarter backers can submit an original monster design for possible publication, while high level backers can commission Kobold Press to design and illustrate their monster idea. In addition to the Creature Codex, this Kickstarter will fund the creation of monster pawns, encounter maps, and more!

We Kobolds love to make bestiaries and monster books! However, it costs quite a bit to create a high-quality, art-heavy, playtest-honed, rules-crunchy volume of 5th edition monsters—and printing a product of this size calls for some financial clout. We’re Kickstarting it to make sure we have the funding necessary for a small, medium, large, huge, or even gargantuan print run, as required.

With your support, we expect to deliver a big book, a juicy and useful PDF, and plenty of extras! Thanks to our prior outing with the Tome of Beasts, we have a seasoned team of skilled 5e monster designers, so you can expect even more innovation and fresh ideas to challenge your players, no matter what level of play they are at.”

Did you back the Tomb of Beasts for 5e? This is more of that, and that project was gold! Those were amazing 5e monsters and this promises to add to it. Best of all, even if you back it at $1, you get a chance to submit a monster for Kobold Press to review and *possibly* publish. As of this writing they’re going to take 30 backer submitted monsters, and they’re likely to unlock 35. That’s 35 chances that a monster you submit will be picked to appear in the book. I’d buy that for a dollar!