4 RPG & 1 Comic Kickstarter You Need To Back – Monarchies of Mau, Buccaneer: Through Hell & High Water, Route 3, A Delve in the Cave, and The S’rulyan Vault II

Want to immortalize your cat (in art)? Design a pirate or a townie NPC? Ever want to read a comic about the road trip from Hell? Need a map through the mega dungeon? Want to meet fun tabletop gamers? If you answered, yes, then you might be building a RPG resume to go from wanna-lancer to freelancer and these are some of the best vanity press crowdfunding rewards that help you learn the RPG ropes. Let’s count these campaigns down!

“Contribute to help us create a beautiful traditionally printed fantasy game book featuring cat monarchies – and get it into stores.

We want to talk to you about Monarchies of Mau. It’s a complete tabletop roleplaying game that acts as a companion game to, and is totally compatible with, my first RPG, Pugmire. The Monarchies of Mau is a nation of cats tenuously comprised of six city-states.” 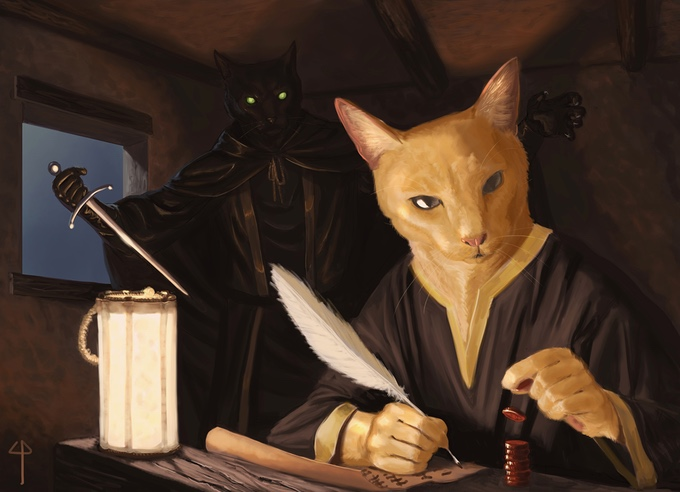 You either raised an eyebrow and want to click the link to the Kickstarter for this anthropomorphic cat-people in a feline fantasy setting OR you rolled your eyes and thought, “Puss in Boots… bah, Antonio Banderas! My arch-nemesis strikes again…” Clearly, you’re either pro-Planet of the Cats or you’ll be canned as Fancy Feast! There is no third option!

[EDITOR’S NOTE – Don’t listen to Egg. He wrote “cats with swords” and felt it was defining. Make your own decision on this one because he’s going to be Fancy Feast no matter what.
As always, may Gary Gygax keep and protect your dice.]

As an added bonus, Monarchies of Mau has a pledge level in this campaign to name a feline (or canine) NPC and have it illustrated to resemble your pet. It’s an opportunity to immortalize a member of the family.

“A curse. A cave. A crawl. 5E fantasy adventure by Jamie Chambers!

Returning to my personal and professional gaming roots with a short adventure for 5E of the original fantasy roleplaying game—a cavern crawl built to please hack-and-slash groups and storytellers alike!

It All Started When …

I accidentally wrote a 5E fantasy RPG adventure! Wanna help me print it? This is a short campaign … it ends on June 16, 2017.” 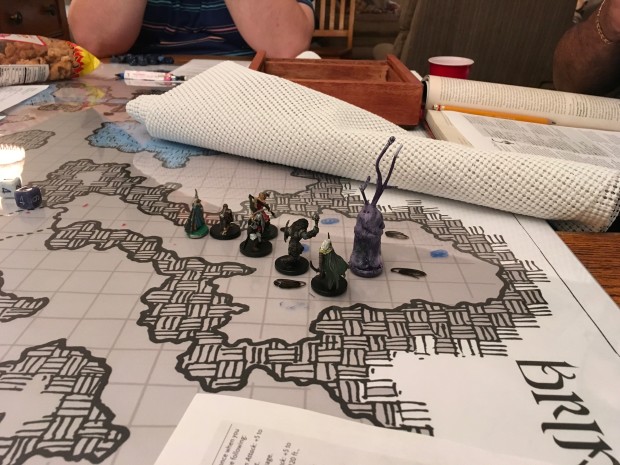 Due to the limited number of details about this cave crawl – it’s for 5e, there’s a curse, and a cave – you’ll need to decide on this project based on the strength of who Jamie Chambers is. So, who is he? Jamie Chambers runs Signal Fire Studios, home of the revised Metamorphosis Alpha RPG, he was a designer and line editor for TSR’s Dragonlance, and a former Vice President on the board of directors for GAMA (Game Manufacturers Association). So, who is he? He’s a gamer with a resume that speaks volumes about his skill. Top that with the fact that I discussed his IndieGoGo campaign last week and suggested that, in a perfect world and since he’s local to me, it’d be cool to meet him. He read the article and said we should make plans. Like so many folks I’ve met through wanna-lancing and gaming and comicing, Jamie’s a nice guy and for that alone this campaign is worth backing.

But, because I’m a wanna-lancer, let me add this reason to back the campaign over and above his resume and affable personality, you can create a NPC and/or playtest this adventure online with Jamie. It’s a nice extra.

Route 3 is a super-powered road trip from hell. A Stone Mountain, GA teen finds out he’s been granted with a set of spectacular abilities, that he knows nothing about. He’s now on the run from a wide array of folks in a sort of super powered arms race across the Southeastern United States. Explosions, gunfights, telekinetic feats of awesomeness, and a little personal growth are all thrown into the mix.

We’ve collected all three issues of the first story arc into a superb collected edition that also includes a cover page gallery, “DVD” extras, and a forward by the talented artist/ writer Takeia Marie (Contributor to Rosarium Publishing’s APB: Artists Against Police Brutality).” 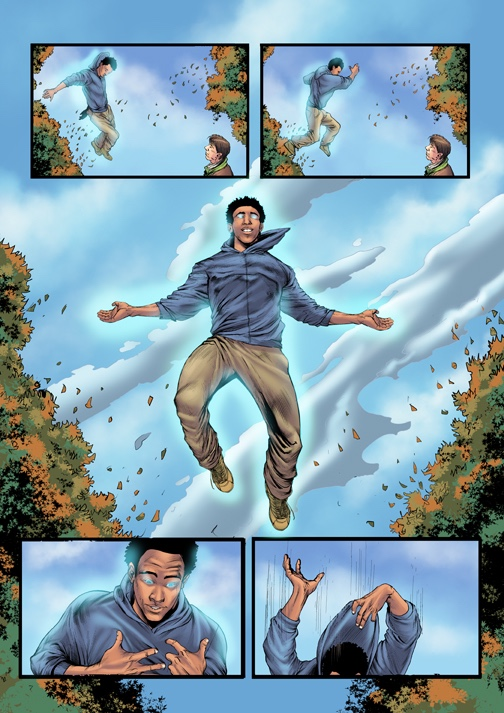 Because Robert Jeffrey is our guildmate, and we love him and Route 3, we’ve shouted out this Kickstarter as much as possible on the Tessera Guild. It’s exceeded its goal (so the collected first story arc is coming) and the campaign is moving through stretch goals. I’m a fan of the series and ready to read more of Sean Anderson’s adventures!

“Pirates, Vodouisants, and Witch Hunters battle each other and beasts of legend in the mystic waters of the Caribbean. Climb aboard!” 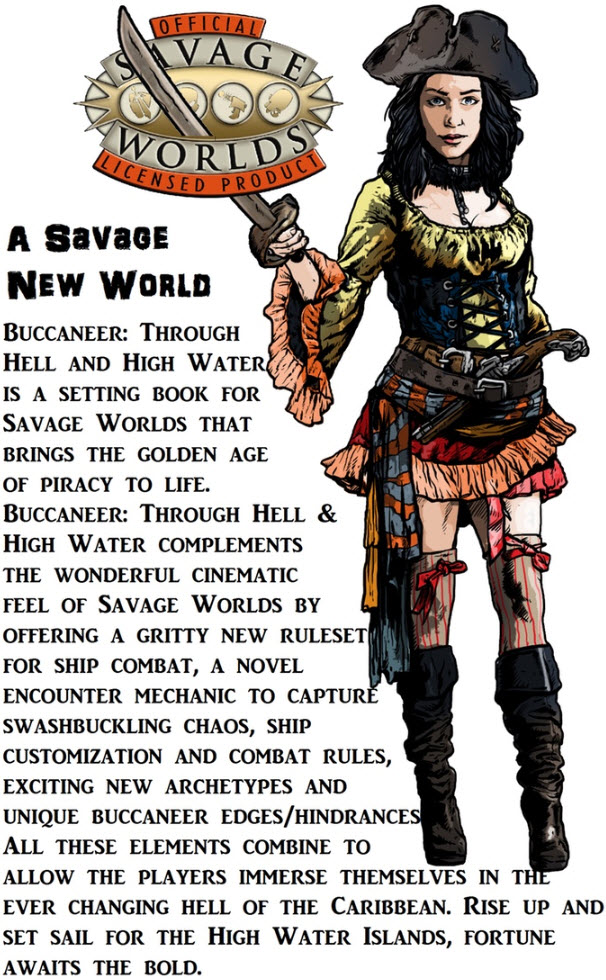 Are you a fan of Savage Worlds (2003 Origin Gamers’ Choice Award for best role-playing game)? Oh, you don’t own the rules? Well, Pinnacle Entertainment has you covered because the core rule book is $9.99 in softcover.

To compliment the game and price point, Yellow Piece Games is kickstarting their pirate setting for Savage Rules. For $15, you get a PDF of the setting and customized rules and also a PDF of pirate NPCs that you get to contribute to. For my wanna-lancer resume, this adds experience with Savage Worlds and another NPC, all for a low price point.

Check out the Kickstarter here – Buccaneer: Through Hell & High Water for Savage Worlds.

“This project is a file/PDF for a high-resolution, printable map in both old school module blue and white, as well as, parchment color.

Basically, this is a continuation of the first S’rulyan Vault which funded on Kickstarter just over a year ago.

The S’rulyan Vault II is more of the same… but different.  Obviously, there will be a totally new dungeon layout with lots of interesting things going on.  The files can be printed off so you’ve got one massive map or four quadrants in order to easily mix and match them with each other and the previous S’rulyan Vault.

This is the DriveThruRPG product listing for the original S’rulyan Vault.

Glynn Seal of MonkeyBlood Design will be doing the cartography, layout, and file preparation.

As for the accompanying PDF full of useful random tables and such for creating and running your own damn megadungeon!  On the fly, if you wish.  Here’s an example from Draconic Magazine.” 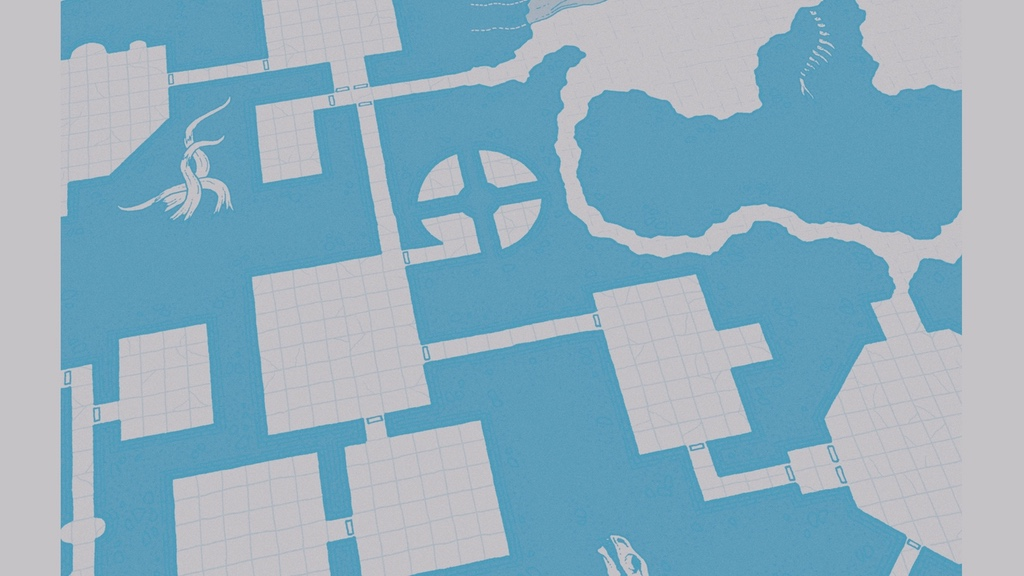 Kort’thalis Publishing’s CEO (Cthulhu Excreted Officer) Venger Satanis is another nice soul. When I mentioned that I wouldn’t mind a RPG mentor in an article, Venger reached out and offered helpful advice, wanna-lancing opportunities, and, if everything works out, freelance RPG work.His help has been awesome and I cannot ask for more from a RPG professional.

Through Kort’thalis Publishing, Venger is making RPG magic. His current Kickstarter is an old-school megadungeon map. Do you need one or two system agnostic megadungeon maps? Yes. Yes, you do, and Venger has you covered.

Venger is also offering another opportunity – paid GM’ing. If you go to a con and run 8 hours of games using one of his systems/settings – Alpha Blue, Crimson Dragon Slayer, CDS 1.11, or The Outer Presence – he’ll pay you for in swag or money. You’ll need to read the description first and talk with Venger about it before you go, but being paid to GM is a cool job.

Check out the Kickstarter here – The S’rulyan Vault II. Check out his offer of paid GM’ing here.

There are a lot of great Kickstarters out there so let me add one more to the pile: